The Day of Your Procedure

Remember you cannot eat or drink anything after midnight the night before your procedure. You may take your usual medications on the day of your exam unless otherwise instructed. Please take those medications with just enough water to swallow. You will not be able to drive home after your colonoscopy or EGD because of intravenous sedation. Please have a responsible adult available to take you home later that day. If any questions arise, please do not hesitate to contact us. Your safety is very important to us.

Colonoscopies allow your doctor examine your large intestine or colon for abnormalities such as polyps and colon cancer by inserting a thin, flexible tube into your anus and advancing it into the rectum and colon.
Download our PDF for more information on colonoscopies.

To learn more about colonoscopies, what to expect, and how to prepare, please visit this link:
https://www.asge.org/home/for-patients/patient-information/understanding-colonoscopy

Endoscopies allow your doctor to examine the upper part of your gastrointestinal tract, such as the esophagus, stomach, and duodenum, using a thin, flexible tube.  This procedure is useful for the evaluation of upper abdominal pain, persistent acid reflux, nausea, vomiting, difficulty swallowing or bleeding. Download our PDF for more information on endoscopies.

To learn more about endoscopies, what to expect, and how to prepare, please visit this link:
https://www.asge.org/home/for-patients/patient-information/understanding-upper-endoscopy

Flexible Sigmoidoscopies allow your doctor to evaluate the rectum and the lower portion of the colon by inserting a flexible tube into the anus. Download our PDF for more information on flexible sigmoidoscopies.

To learn more about Flexible Sigmoidoscopies, what to expect, and how to prepare, please visit this link:
https://www.asge.org/home/for-patients/patient-information/understanding-flexible-sigmoidoscopy 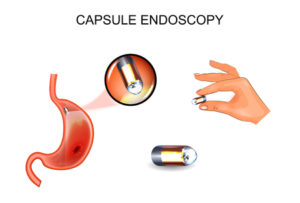 This procedure allows your doctor to examine the middle part of your gastrointestinal tract, which would not be accessible with a traditional endoscopy or colonoscopy.  The patient ingests a small, pill sized video camera that takes a picture recording of the small intestine as it passes through.

Download our PDF for more information on capsule endoscopies.

To learn more about Capsule Endoscopies, what to expect, and how to prepare, please visit this link:
https://www.asge.org/home/for-patients/patient-information/understanding-capsule-endoscopy

You should not drive an automobile or use any equipment that may injure yourself or others 24 hours after discharge. Please have assistance when walking up or down stairs. To prevent nausea after you have been put to sleep, you should begin your food intake with liquids (any type of liquid – soup, broths, jello, ginger ale, etc.) and progress to solid foods slowly. You should not drink alcoholic beverages for 24 hours after discharge. If you become dizzy, lie down completely flat until all dizziness is gone. Legal decisions should be delayed for 24 hours after discharge. Parents may need assistance with children at home for the remainder of the day. If you have any problems after arriving home following your procedure, please contact us at 434-572-8196. If the office is closed, you can contact your doctor 24 hours a day by calling Sentara Halifax Regional Hospital at 434-517-3100.

At Southern Gastroenterology Associates we offer the following interventional procedures, performed by our board certified physicians. These are performed on an outpatient basis with the assistance of our trained staff. Please click on the PDF link for more information on each procedure:

Conditions and Diseases of the GI Tract

This content is not a substitute for medical advice, diagnosis or treatment provided by a qualified healthcare provider. Always seek the advice of your physician or another qualified health provider with any questions you may have regarding a medical condition.

Barrett’s esophagus is a change in the part of the esophageal lining near the stomach caused by the reflux that occurs with GERD. The changed lining is not cancer but puts one at a higher risk for cancer, making routine monitoring important.

Celiac disease damages the tiny hair-like projections (villi) in the small intestine that are needed for nutrients from foods to be absorbed into the body. A person with celiac disease cannot tolerate gluten, a protein in wheat, barley, and rye. When he or she eats gluten-containing products, the immune system responds by damaging the villi. The person can develop severe diarrhea and become malnourished even if eating well.

Cirrhosis of the liver

Cirrhosis of the liver (Hepatic cirrhosis) is a condition that develops over time and occurs when liver tissue is replaced with hard scar tissue caused by a variety of insults including hepatitis C, heavy alcohol consumption, obesity, fatty liver disease or other strains of the hepatitis virus. Scar tissue does not work as well as normal tissue and can lead to liver failure. Ascites, a condition in which fluid collects in the abdominal cavity, is one result of liver failure.

Clostridium-difficile infection (C-diff) is defined as the onset of diarrhea with toxigenic c. difficile or its toxin, when there is no other cause for diarrhea. The two biggest risk factors are exposure to antibiotics and exposure to the organism (the bacterium is usually spread through the fecal-oral route.) Depending on severity and recurrence rate, treatment can range from antibiotics to fecal microbiota transplant.

Colorectal cancer (colon cancer or rectal cancer) is the third most commonly diagnosed cancer in the USA.  It develops in the digestive system of approximately one in twenty adults, affecting men and women equally.

Crohn’s disease is an inflammatory condition that can affect the entire thickness of the bowel wall or any part of the GI (gastrointestinal) tract, sometimes leaving patches of diseased intestine among the normal areas. The symptoms that can result include abdominal pain, weight loss, bowel urgency, diarrhea, and blood in the stool. Although Crohn’s disease is a chronic condition that cannot be cured, it can often be controlled with the proper treatment.

Chronic diarrhea is the production of loose stools with or without increased stool frequency for more than four weeks. There are many causes for chronic diarrhea, and the appropriate diagnosis can be achieved with a correlation of data from history, physical examination, laboratory test, x-rays and/or endoscopy studies.

Diverticulosis refers to the presence of diverticula (small pouches or sacs) that can develop in the lining of the GI tract. They are most common in the left side of the large intestine, area known as the descending and sigmoid colon. Diverticulitis is when the diverticula becomes infected or inflamed. People presented with this complication can experience fever, abdominal pain (usually in the lower left side), diarrhea and/or constipation and decreased appetite. Treatment requires antibiotics and possibly hospitalization.

Eosinophilic esophagitis (EoE) is characterized by a large number of eosinophils (a special type of white blood cells) that can cause inflammation in the esophagus. This can lead to stiffening and narrowing in the esophagus, causing difficulty swallowing. These factors may also be present with GERD. Currently the only way to diagnose EoE is by performing an upper endoscopy with biopsy.

Gallstones form in the gallbladder or bile duct. The gallbladder stores bile which is made by the liver. Bile helps digest dietary fats. Gallstones made of cholesterol can be as small as a grain of sand or as large as a golf ball. Most gallstones do not need treatment, but if they block the duct, the stones and/or the gallbladder may need to be removed.

Gas in the digestive tract is common and normal. Occasional gas is eliminated by burping or passing it through the rectum. Gas comes from two sources, swallowed air and the process of breaking down of foods in the intestine. Foods that contain carbohydrates commonly cause gas: sugars, beans, starches (such as potatoes and corn) and fiber.

Heartburn is the burning or pressure sensation under the breastbone that rises into the throat. It is one of the symptoms of GERD (gastro esophageal reflux disease). In GERD, stomach acid rises and damages the lining of the esophagus. Occasional heartburn can be reduced by avoiding or limiting fried or fatty foods, tomatoes, citrus fruits, juices, chocolate and caffeine, and by eating smaller meals. GERD should be assessed by a doctor.

Hepatitis is inflammation (swelling) of the liver. It can be caused by alcohol abuse, certain medications, and hepatitis viruses. Hepatitis C is spread by contact with infected blood from another person. After contact, Hepatitis C can become a chronic infection which leads to liver damage.

Inflammatory bowel disease (IBD) refers to a group of diseases that affect the colon; the best known of these are Crohn’s disease and ulcerative colitis (UC). Common symptoms include vomiting, diarrhea and weight loss. The diseases differ in the area of the intestine affected and in their treatments.

Irritable bowel syndrome (IBS) occurs with the colon does not contract with its normal wavelike motions, and instead moves more slowly or more quickly, or when contractions become disorganized (spastic colon). This can cause periods of pain, cramping, diarrhea, and constipation.

Pancreatitis is an inflammation of the pancreas that occurs when its digestive enzymes are activated before they are released into the small intestine. When this happens they attack the pancreas, causing damage. Pancreatitis can be acute or chronic, and depending on its severity may require hospitalization for treatment.

Peptic ulcer disease is the most common type of ulcer in the GI tract. It is caused when acids in the digestive system corrode the stomach lining. Ulcers also can be caused by certain bacteria (Helicobacter pylori or H-pylori) or medicines (aspirin, warfarin, and NSAIDs).

Ulcerative colitis is an inflammatory condition involving the innermost lining of the colon, beginning in the rectum and extending up to the colon (large intestine). Symptoms can include abdominal pain, weight loss, bowel urgency, diarrhea, and blood in the stool. Although ulcerative colitis is a chronic condition that cannot be cured, it can often be controlled with the proper treatment.

You can find more information online at the American Society Gastrointestinal Endoscopy. Visit their website at http://www.asge.org